Types Of Golden Retrievers: Why There Are Really Only 3 Kinds

Everyone is familiar with the Golden Retriever, one of America’s favorite dogs. We all instantly recognize their smiling faces, long golden hair, and ever-wagging tails! In fact, according to the American Kennel Club, Goldens are the 4th most popular breed in the U.S.

You may know exactly what a Golden is, and some people claim there are 8 types, but did you know there are really only 3 types, and they’re all technically the same breed?

If you’re looking to add a new member to your family, check out the three recognized types of golden retrievers and the five “unofficial” types of Golden Retrievers below.

Are There Different Types of Golden Retrievers?

Though they’re all technically one breed (Golden Retriever), there are technically 3 official subtypes of Golden Retrievers: American Goldens, British (or English ) Goldens, and Canadian Goldens. Before you get too stressed out about which might be right for you and your family, just know that their differences are very slight.

Keep reading to find out more.

A Brief History of the Golden Retriever

The modern Golden Retrievers we know and love today are descendants of the first Goldens bred in mid-1800’s Scotland. These Goldens resulted from a combination between the Tweed Water Spaniel, Bloodhound, and Yellow-Colored Retriever.

These original Goldens were bred to hunt and withstand the harsh winters of Scotland. Over the last 200 years, Golden Retrievers have been bred and refined to create different styles and variations of the great family dog we all adore. When thinking of that familiar face you’ve seen in family movies or trotting through your local pet store with their owner, you’re probably imagining the American Golden Retriever. The American Golden is considered the general standard of the breed. While there are similar Canadian and British counterparts, the American is the most popular.

The American Golden Retriever has a rich gold coat. The shades of gold can vary slightly but can be neither too light nor too dark. Adult males stand at the height of 23-24 inches, while females stand at 21.5-22.5 inches. Male American Goldens can weigh as much as 65-75 pounds, while adult females are slightly smaller at 55-65 pounds.

American Golden Retrievers are well-loved by all, showing loyalty and friendly nature to everyone. They are also highly intelligent and eager to please. With that said, American Goldens are known for being a little more energetic than other breed variations.

They make an excellent pet for younger couples who enjoy many outdoor activities or families who can spend a lot of time playing with them. 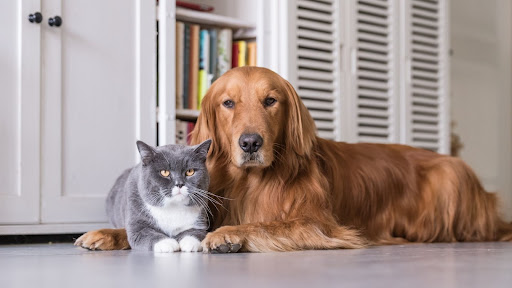 Canadian Golden Retrievers are essentially the same as American Goldens, with minimal variation.

Overall, Canadian Goldens and American Goldens are the same dogs in different locations. 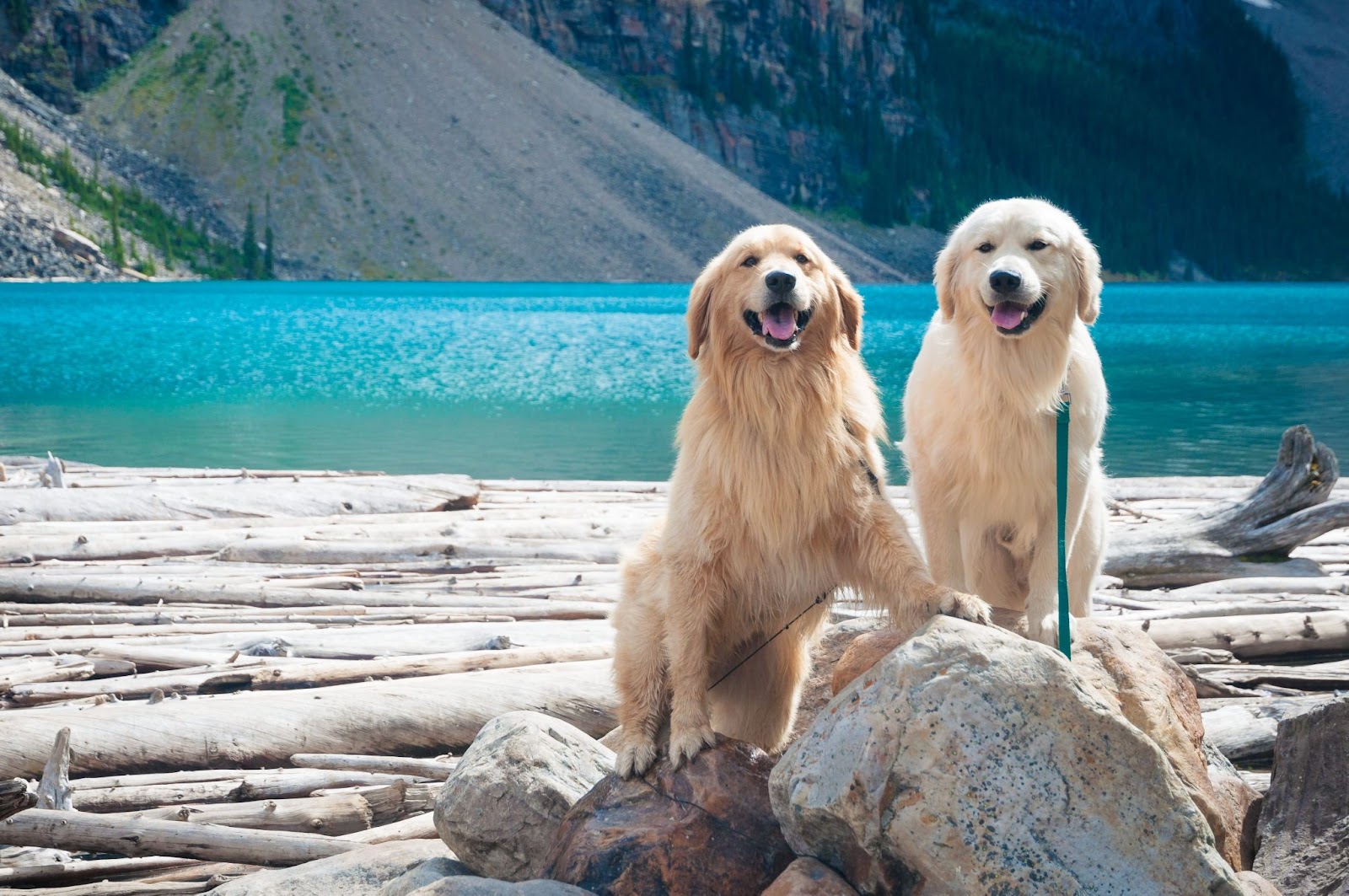 The British Golden is typically a lighter shade of gold than the American type. They also come in shades of cream, which some breeders refer to as “English Cream.” They stand shorter in stature, with adult males reaching 22-24 inches and females reaching heights of 20-22 inches. The standard weight for British Golden Retrievers is not specified, but most weigh anywhere between 55 to 70 pounds.

British Golden Retrievers are highly devoted, friendly, and intelligent. Many breeders report that British Golden has fewer potential health conditions like hip dysplasia and elbow dysplasia than the American or Canadian versions. Still, there are no studies to confirm this. 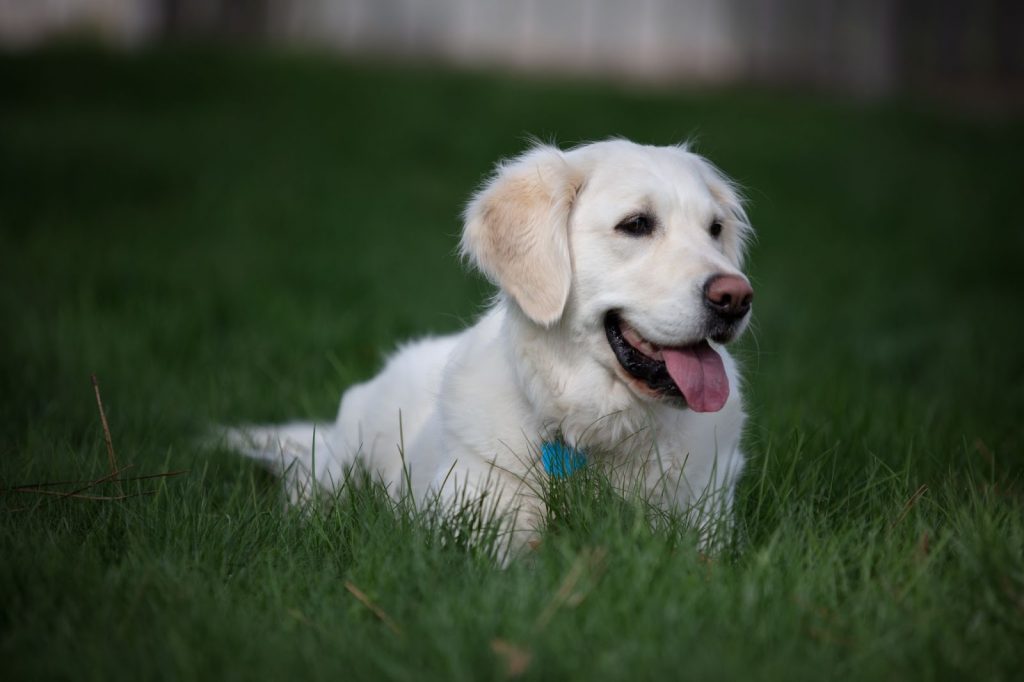 English Cream Goldens have lovable personalities with a calm, friendly nature. They are incredibly smart and easy to train, as well. With that said, English Cream Golden Retrievers are often more expensive than other types of Goldens because of their desirable appearance. Depending on the breeder, the average puppy can cost around $3,500. 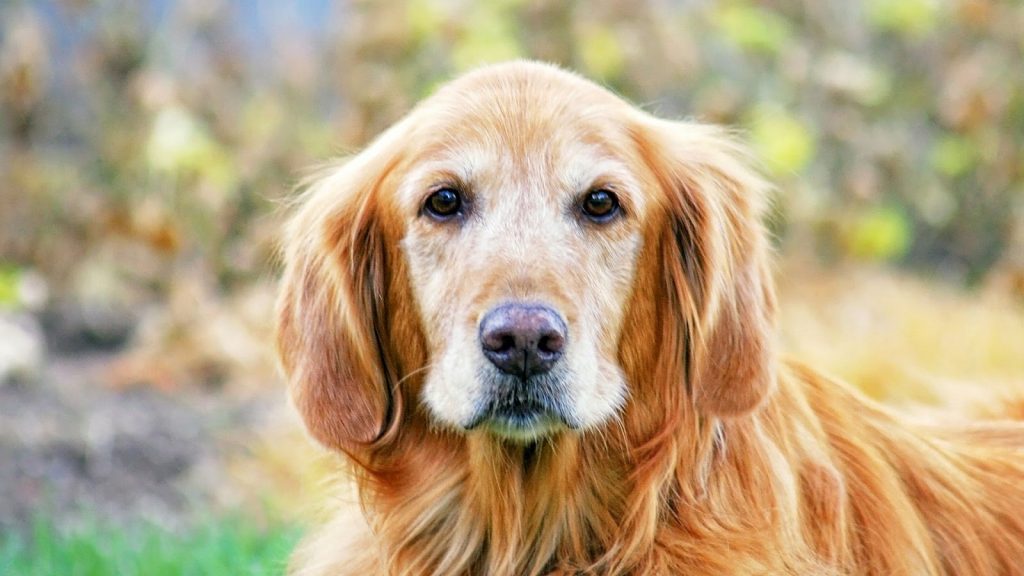 Field-bred Golden Retrievers are the most reminiscent of the original Goldens bred back in 1800s Scotland. They are highly motivated working dogs that enjoy sporting activities like hunting.

These Goldens range in color from dark golden to red, with shorter to mid-length coats. They have a smaller stature than other Golden Retrievers, with adult males standing at 21-23 inches and females at 21-22 inches. Males can weigh between 60 and 70 pounds and females between 50 and 65 pounds. 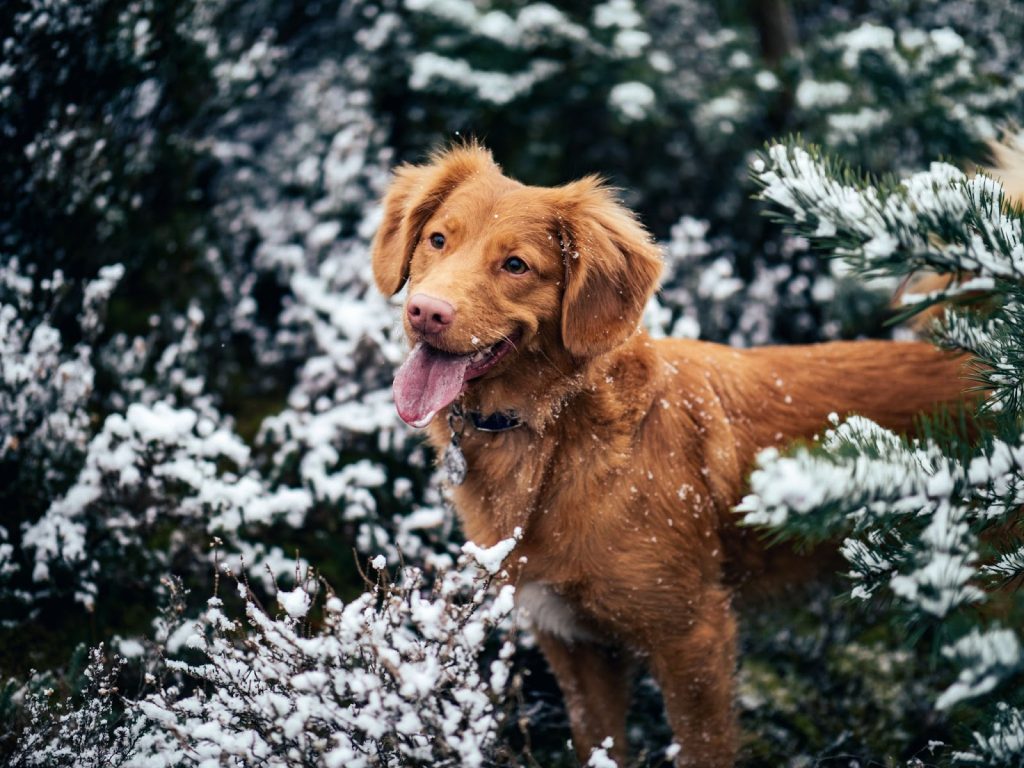 Red Golden Retrievers are often variations of the Field-bred Golden that happen to be red.

Red Goldens get their name from their distinctly red coat. That is often a deep, bright red that distinguishes them from other kinds of Goldens. Their hair is often thinner and longer than other types of Goldens, as well.

They tend to stand smaller in size, with males topping out at around 22-23 inches and females 21-22.5 inches. Adult males can weigh between 65 and 75 pounds and females between 55 and 65 pounds.

With most red Goldens actually being Field-bred Goldens, they are highly driven and motivated to work. These dogs will have high energy levels and benefit from being given tasks to assist with. Many owners report that they do tend to be a little mouthy, wanting to grab things in their mouth even when they should not, such as their owner’s hands. 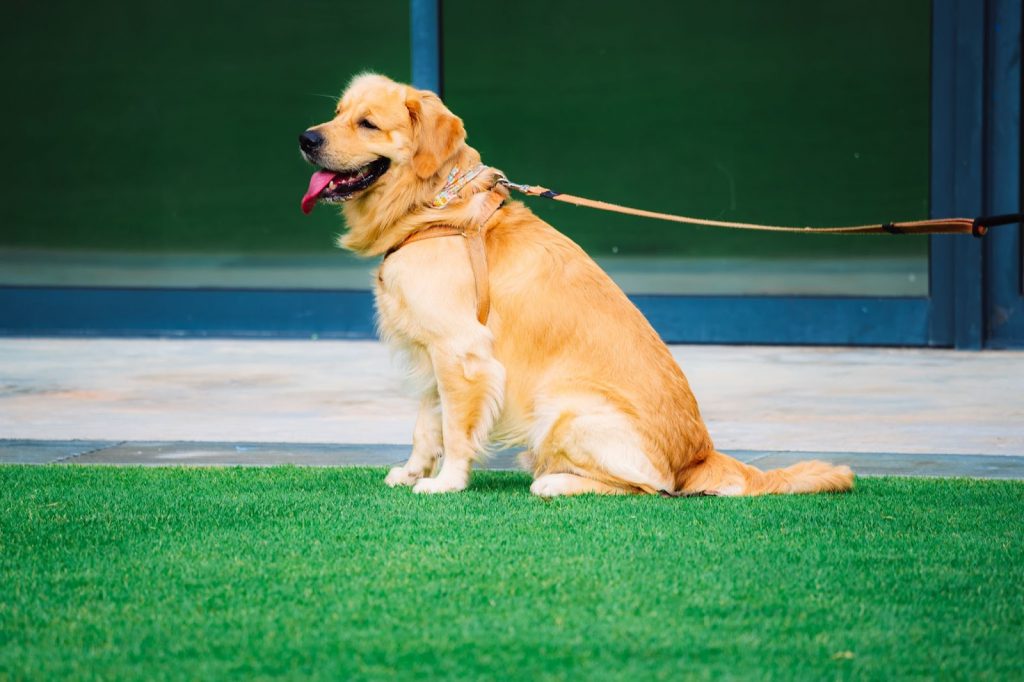 Show Golden Retrievers are a style that is bred to meet exact breed specifications to be shown in competitions.

With perfectly golden coats and long hair, Show Goldens are often quite remarkable in appearance. They are large-boned and thick in stature, with a wider, more broadhead than average Goldens.

Show Golden Retrievers have all the same wonderful characteristics as other types of Goldens, being friendly and well-natured. However, since Show Goldens are bred to meet very specific breed standards, they are often costly. They are ideal for owners who are looking to exhibit their dogs in competitive dog shows. 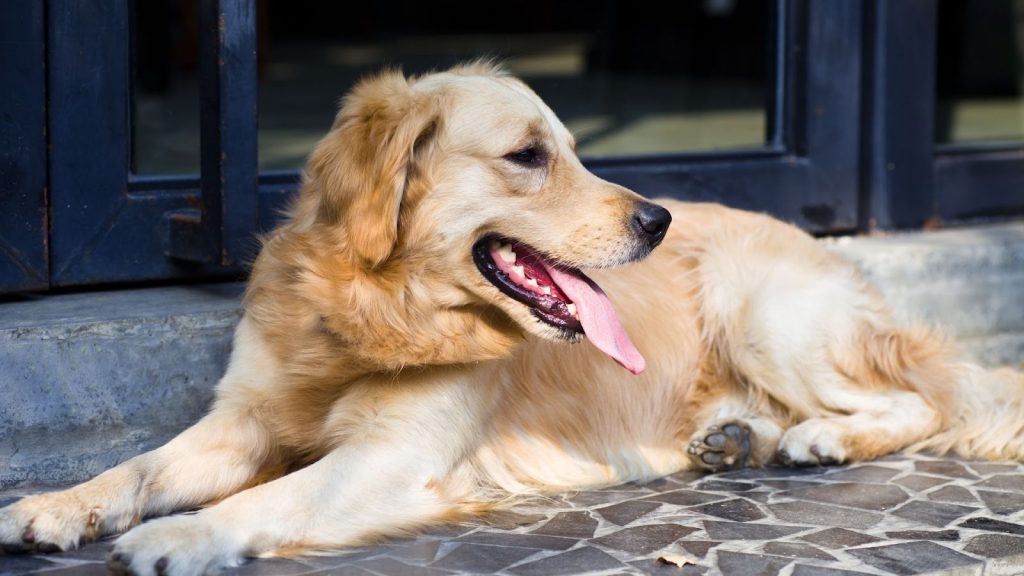 Since mini Golden Retrievers are hybrid breeds, they have no actual breed specifications. Their coat color can vary from light cream to dark gold or red, with extreme variations in length. Their heights vary, but most are under 20 inches tall, males and females. Their weights can vary as well, typically staying anywhere between 30 and 50 pounds.

Miniature Golden Retrievers are excellent for anyone who desires certain personality traits of a Golden Retriever without the medium-to-large size. With that said, mini Goldens do not always take on the friendly, happy-go-lucky nature of purebred Goldens. Since they are crossbred, they can have attributes of other breeds. Much like the mini Golden, anything being referred to as a “black Golden Retriever” is basically a crossbreed. Purebred Black Golden Retrievers do not exist but can essentially be created by mixing any variation of a Golden with a black Labrador, Newfoundland, or other breeds.

The coat, height, and weight of a black Golden will vary because it is actually a mixed breed. Since many Goldens are bred with Labradors, they would likely be of medium-to-large build, with males or females anywhere between 50 to 75 pounds.

Some Goldens may even be mixed with Newfoundlands, which would result in a much larger dog, weighing 80 to 120 pounds or more.

Which Golden Retriever Is Right for You?

Determining which type of Golden Retriever is best for you depends on your unique lifestyle. All kinds make a great family pet, but some have distinct characteristics that make them better suited for specific homes. To decide which Golden is ideal for your family, you can consult with a reputable breeder or trusted veterinarian!

Find your new best friend from our list of top-quality Golden Retriever Puppies For Sale.

Frequently Asked Questions About the 8 Types of Golden Retrievers

What is the best color for Golden Retrievers?

Standard gold has been shown to be more popular out of the colors of Golden Retrievers. Each color type has specific characteristics. A lighter shade tends to look more white in the light while the darker Golden Retrievers consist of more deep reds and blacks.

What is the difference between English, Canadian, and American Golden Retrievers?